Half Mag / Half Zine

The 10 Most Famous Tapas Dishes From Spain

Travellers are advised to read the FCO travel advice at gov.uk/foreign-travel-advice for the country they are travelling to.

From tasty tapas to superb seafood and traditional roasts, food in Spain is all about making the most of the best local produce. We asked travel writer Annie Bennett to pick 10 of the best dishes to try on your travels.

Discover even more fabulous foodie travel experiences and our top eats across the globe in our travel hub.

The reddest, ripest tomatoes, olive oil, garlic, bread, peppers and cucumber are blended until silky smooth, then chilled and poured into bowls or glasses. So delicious, so refreshing. In Andalucía in southern Spain, people have it every day in summer and there is always a jug on the counter in tapas bars. Also try salmorejo from Córdoba, a thicker version that is often served with pieces of Ibérico ham on the top.

In the Valencia region, they claim you can eat a different rice dish every day of the year, but let’s stick with the most traditional version for now. Ingredients for paella Valenciana include chicken or rabbit, saffron, runner beans and butter beans. But the all-important element is the rice, ideally the bomba or Calasparra varieties grown on Spain’s east coast, which are particularly good for absorbing all the flavours.

Eggs, potatoes, onions… that’s it – and some purists even consider that adding onion is a gastronomic crime of the highest order. The Spanish omelette is so much more than the sum of its parts. The potatoes and onions are slow fried in olive oil then mixed with the beaten eggs for the flavours to mix before cooking. Add chorizo, ham, spinach, courgettes or whatever you have to hand to make a tasty meal out of next to nothing.

You walk into a tapas bar, the barman is handing a customer an earthenware dish of sizzling prawns, the tantalising aroma hits your nostrils and you just have to order some too. To recreate it at home, just fry some sliced garlic and green chilli in olive oil, throw in the prawns for a couple of minutes and add some parsley. Couldn’t be simpler, couldn’t be tastier.

Try making your own… garlic prawns

Black pigs roam among the holm oak trees in western Spain in search of the acorns that give marbled magenta Ibérico ham its distinctive nutty flavour. Rub thick pieces of toast with garlic and tomato, pour on some olive oil and top with slices of jamón for a quick, delicious lunch.

Perhaps the most ubiquitous of tapas, patatas bravas vary quite a bit around the country, but all versions involve chunks of fried potato. In Madrid, bravas sauce is made with sweet and spicy pimentón (Spanish paprika), olive oil, flour and stock – but never tomatoes. Some people add garlic, some a dash of fino sherry, while others selfishly insist on keeping their secret ingredients to themselves. 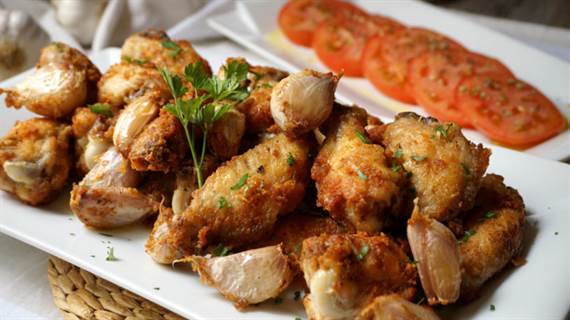 Any Spaniard will tell you that the best garlic chicken ever is the one their grandmother makes. And of course they are right. Unpeeled cloves of garlic are fried in olive oil to flavour it, then taken out before adding pieces of chicken. When that’s cooked, the garlic goes back in with some rosemary, thyme and some dry sherry or white wine. But there is no definitive recipe for this much-loved dish.

People might claim they are going to Segovia to see its astounding Roman aqueduct, fairytale castle or elegant cathedral, but really all that is just to build up an appetite for lunch. And in Segovia that means either roast suckling pig or lamb. The meat is cooked in huge wood-fired ovens and is so tender it is cut with the side of an earthenware plate.

The Spanish version of ratatouille turns up all over the country in different guises, but is most typical in the towns and villages across the plains of La Mancha, south of Madrid. Onions, garlic, courgettes, peppers and tomatoes are slow fried in olive oil – this is not a dish that likes to be rushed. It’s usually served as a starter, sometimes with fried eggs or chorizo, but is great as a side dish too. 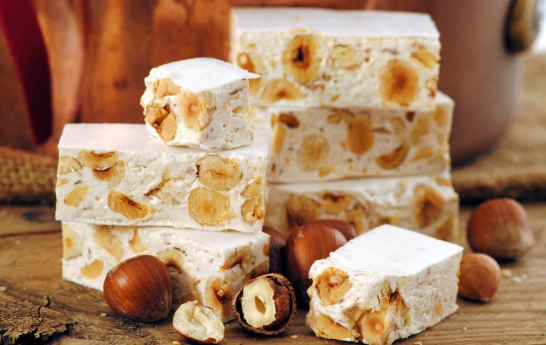 Spaniards devour massive amounts of turrón, or almond nougat, at Christmas, although it’s available all year round. Most of it is made in the small town of Jijona in the province of Alicante, using locally-grown almonds mixed with honey and egg white. There are two basic types – a soft, smooth version, called Jijona, and hard Alicante turrón, which contains pieces of almond.